Ever wondered how a VanMoof gets made? To celebrate the launch of the Electrified S2 & X2, we’re picking the brains of VanMoof’s international R&D team to see how they’ve turned their ideas into new product features. First up, the new Electrified's eye-popping Matrix Display.

But the Electrified S2 & X2’s most eye-popping new feature takes its cue from the most old-school of AV tech – the dot matrix display. Forget dodging bullets, this kind of matrix is best-known from airport departure boards and early calculator displays, using a grid of illuminating ‘dots’ to form numbers, letters, and other symbols.

So far, so low-tech, right? But the S2 & X2 are no calculators, and the new Matrix Display is as forward-thinking as they come. In place of a traditional ‘screen’, 166 holes have been precision-drilled into the top tube, above a custom mesh of connected LEDs. When switched off, it’s near-invisible. But turn it on (or bring your phone into Bluetooth range) and the bike literally lights up, displaying rider info on the surface of the frame itself.

“I remember looking at my MacBook, and seeing the sleep indicator light ‘pulsing’ through the metal chassis – like the aluminum itself was glowing. It’s such a simple technique, but so effective,” explains Job Stehmann, VanMoof Head of R&D. “ I wanted to see if we could create the same effect on the S2 & X2 by drilling very precise holes in the tubing and allowing a network of lights to shine through.”

Developing the Matrix Display was a painfully long process, with hundreds of prototypes dating as far back as 2014.“The technology itself has been around for decades, but it had never been built into a bike,” says Product Designer Alexandre Phaneuf. “99% of screens are flat, so we had to develop a special kind of tooling to account for the curve of the top tube and make sure the lights shine evenly. Then there are the seemingly simple things – we spent ages tweaking the paint finish, for instance, to make sure the lights really stand out.”

But building the display wasn’t the only challenge. “We had to decide what we were going to put on it,” grins Alexandre. Unlike the LCD screen on the previous Electrified S, the S2 & X2’s Matrix Display can show a much wider range of content, with graphic images conveying everything from ride speed to alarm status.

Riders now see a padlock snapping shut when they engage the bike’s Stealth Lock, and a swelling heart when the bike detects them nearby. For would-be thieves, it’s a different story. When the bike detects anyone tampering with it, the display flashes a skull in warning as the alarm enters its first phase. Keep up the unwanted attention, and the skull gets increasingly irate, gnashing its jaws and flashing its eyes as the alarm kicks into high gear. Maybe the display isn’t enough to scare off thieves single-handedly (that’s what the rest of the Electrified’s theft defense system is for), but it definitely demonstrates a new kind of connectivity between bike and rider.

“We wanted the Matrix Display to be a functional tool, but we also saw it as an opportunity to develop the bike’s personality – so we consulted with artists and animators until the icons and sequences felt right.”

We now have a new way to communicate with our riders, which is uncharted territory for us,” says Job excitedly. “Our previous displays were always a separate unit housed in the frame. Now it’s a completely seamless experience, as if the bike itself is speaking directly to the rider. In the future, we’ll be able to update the imagery remotely or change it based on your location or riding conditions. It’s a really exciting piece of tech, and this is just the start – the Matrix Display is going to get even better the longer you ride.”

Want to see the Matrix Display in action? Drop by your nearest VanMoof brand store to take the Electrified S2 for a test ride.

Multiple owners and more customizable options: Our new app features can make your VanMoof more unique than ever. 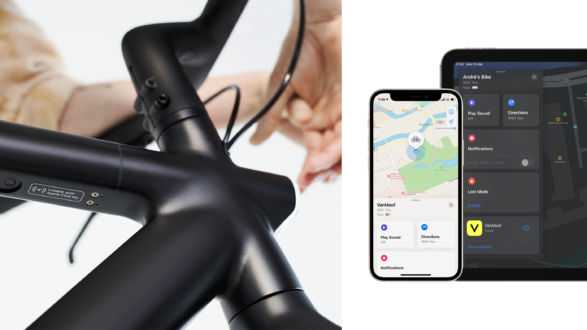