As VanMoof Product Owner Myrthe Palmboom makes clear, “Tech is still a man’s world”. At VanMoof, we felt it was time to take action and help to create a more equal future. So when we were approached by VHTO to participate in Girls’ Day, we were immediately onboard.

It’s hardly a surprise to learn that women are under-represented in science, technology, engineering, and maths (STEM) careers. According to the UN, less than 30% of researchers worldwide are women, and only around 30% of all female students pursue STEM-related fields in higher education. The reason for this? Enduring gender stereotypes, a serious lack of female role models, and longstanding biases that steer girls and women away from male-dominated fields. And as the data makes perfectly clear – this gendered generalisation couldn’t be further from the truth. At VanMoof, we decided it was time to take action. We wanted to play a part in challenging the stereotypes and creating tangible role models for girls in our home city of Amsterdam – the question was where to begin.

Then we learnt about VHTO. VHTO is a Dutch organization which focuses on helping more young women enter the science and technology field. To get to the root of the problem, VHTO believes we need to tackle and disrupt the stereotypes that young people are exposed to as early as possible. They facilitate inspiring workshops across Europe to support girls aged between 10 and 15 in taking the road less traveled. And as soon as we heard about the initiative, we wanted in.

We invited girls from the Metis Montessori school to our Amsterdam HQ to meet the team and show them how their technological studies come into play in the workplace. Coding teacher at Metis, Hakan Akkas told us a little more about our visitors: “The girls are already a minority in our weekly programming classes,” Hakan tells us. “If there are 30 pupils we might only have three to four girls. So seeing professional women who do these kinds of jobs is inspiring, and helps to challenge the stereotypes that suggest that science or engineering are boys’ subjects.”

Like Hakan, Product Owner Myrthe Palmboom hoped that the girls left the day of workshops at VanMoof feeling inspired. Myrthe walked us through the program for the event, “All of our workshops were organised by girls, for the girls.” The groups rotated around three workshops inspired by a design sprint, including an experience design ‘inclusivity through accessibility’ workshop, which focused on how to design features for every different kind of user. There was also an industrial design workshop where the girls made their own 3D bikes models. Finally, there was a workshop where they could test the connectivity with the bike itself. Oh, and of course part of the afternoon was spent Bike Hunting in the neighboring Oosterpark – because how could a day at VanMoof not include one of our favorite activities?

For Hakan, visiting VanMoof provides a unique opportunity for his students to see the things they’re learning about in school come to life: “One of the things I found most important about these initiatives is that they actually see the things they learn in school as real world skills. For them to realize that the things they’re already learning are actually being used in companies like VanMoof is important.” From Myrthe’s perspective, there are endless possibilities within the world of tech that many girls might not be aware of, “I hope that the main takeaway for the girls today is that the possibilities within tech are broad, and very much open for girls. 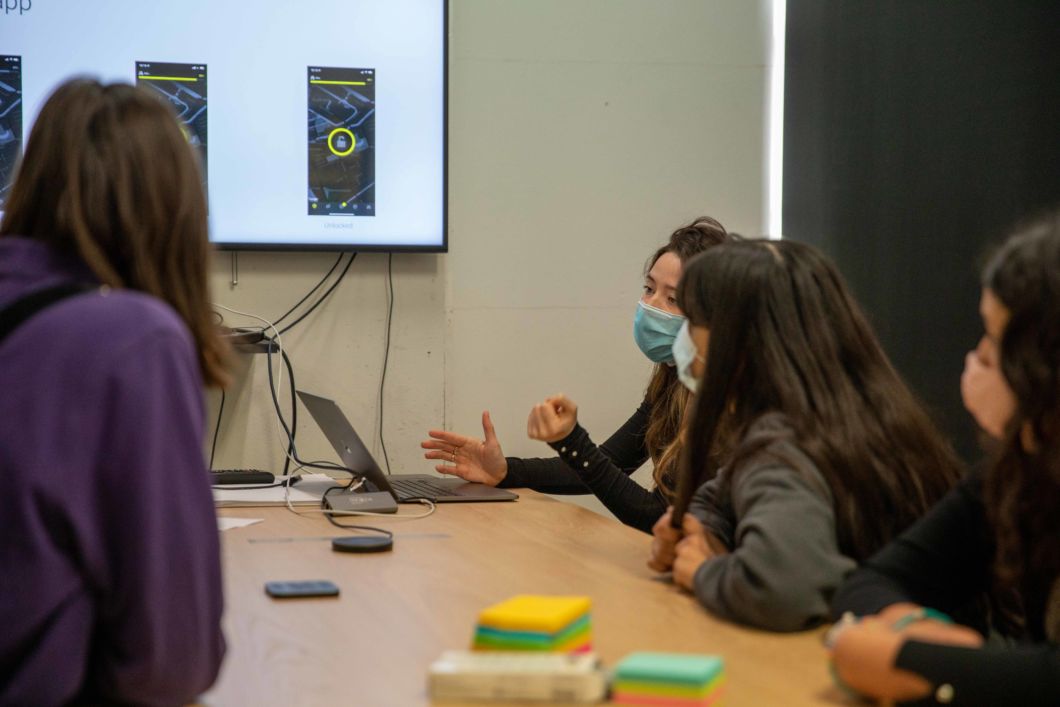 “Tech is still a man’s world”: the journey towards equality

Striving to boost female representation in the STEM world is crucial, and Myrthe speaks from experience: “If you spoke to the women in VanMoof’s Research & Development team about the path they took to get to where they are now, I don’t think any one of us imagined that we would be working in tech. In that way I think it’s important to show that we are working in tech, that we can, and that it’s in fact super important that we do.” She tells us that the impact of greater numbers of women working in engineering and tech within VanMoof, is vital for us to reach a different demographic: “VanMoof bikes are still mostly bought by men. So I think getting women onboard in the design process is very important.”

We’re proud to have been able to contribute to VHTO’s inspiring mission to empower girls and women in spaces conventionally occupied by men. But today has also taught us that we still have plenty of work to do. Myrthe and the team had the freedom to build the day and make it happen, despite the restrictions of the ongoing pandemic, “Within VanMoof it’s really clear that we’re striving for greater equality – tech is still a man’s world. Hiring with that in mind is absolutely still necessary.” Connecting with our scholarly neighbors and coming together to inspire girls in Amsterdam was a step towards a more equal future – and who knows, maybe our future e-bikes will be designed by some of our visitors. From the ideas they came up with in the workshops, we wouldn't be surprised.

Move fast to secure your Outlet e-bike for even less: Our limited Outlet Warehouse Sale drops in Utrecht, starting this Saturday

In conversation with Tobias Fouracre: the Puppet Mastermind behind our latest film

Learning? It’s just like riding a bike. We take a look at how we keep our brains constantly evolving at VanMoof.

The cost of reinventing the wheel, by Taco Carlier.