Who walks into a car dealership and walks out with a bike? David Shinn. Three years ago, construction worker David hopped onto his first Electrified S, and the rest is history – his whole family is now riding VanMoof bikes, and he recently upgraded to the S2. We joined him on his Electrified S2 commute, starting in Brooklyn, along the Williamsburg bridge, to Midtown Manhattan.

So you walked into that car dealership, obviously looking to buy a car. Why did you go for the bike?

The bike was mounted on one of the car racks, and I was blown away by the design. I thought it was a new product from the car manufacturer, but they sent me over to VanMoof. Cycling in the city has blown up over the last few years, but with my job, I often have to bring tools with me, and it’s not possible to carry them by bike or public transport.

So I still need a car, but I’m sick of driving, gas, tickets, and traffic. I hate traffic. When you’re riding a bike there is no traffic, it’s just me and my little world rolling by. As long as I was able to get up and down hills, forget traffic and still be faster than a car, I was sold.

After visiting the car dealership I went to the VanMoof brand store, took a test ride... and bought it immediately. The sleek design, integrated lights, and communication with my smartphone got me. I’m a tech-savvy guy, I like products that are new, and kind of different.

"I wasn’t even looking for a bike - it caught my attention, that’s how beautiful the bike was. I was in a car dealership looking at cars and buying a bike."

You told us already, but seeing you riding through the city confirmed it. You really are a power freak.

I love adrenaline – that really gets me going. I mean, the only guys that can keep up with me are the spandex ones. They look like they’re world-class racers in that whole outfit, but I’m doing the same, in my normal clothes, without breaking a sweat.

The extra power in the S2’s Turbo Boost really sold me on the upgrade. It’s a lot more aggressive and it maintains your top speed better than the previous generation Electrified.

"The immediate acceleration of the boost button makes you fly. Even going up a hill where others are struggling, you’re just breezing by."

"I don’t have to worry about anything. I’m in my own little world, taking the scenic route and watching the stars, buildings or people. It’s great."

You have a ‘house full of VanMoofs’. Were your wife and son fans from the beginning as well?

After buying my the Electrified S in 2016, I was blowing past everybody all the time. People get jealous, you know? They start complaining that it’s ‘not fair’ and ‘you don’t even pedal’. Especially when you’re going up a hill, and you’re just cruising while the others are sweating and trying to breathe, it’s a no brainer.

I told my wife and my son, “you know what? I’ll get you both one.” Now we ride all ride around comfortably, and we don’t have to worry. At the moment we have an Electrified S, an Electrified X, and the Electrified S2 in both Fog White and Thunder Gray.

The attention you get is enormous. We have the black and yellow Electrified X, and it’s such a hit on the streets. It was an exclusive for Tokyo but when I heard that there were hundred coming to the States, I needed to have one.

"I got so many compliments riding VanMoof – it really makes you stand out in the city." 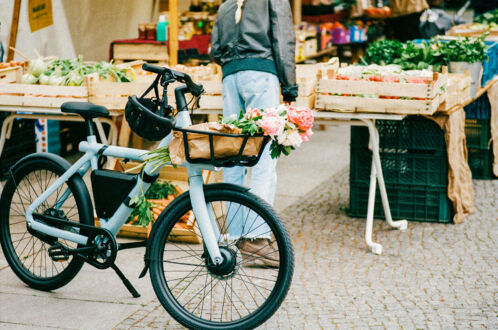