Looking back on a long career, an archive of magazines – Elle, Glamour, Vogue – chronicle Martien Mellema’s rich contributions to the Amsterdam fashion scene over the years. From the outset, her unique professional outlook was built upon open-mindedness, collaboration, curiosity, and a deep appreciation for interacting with people. Community is also central to Martien’s love affair with IJburg: a dynamic yet tranquil neighbourhood under constant construction, just a scenic cycle from the heart of the city.

In the 1980s, when the first plans emerged for a futuristic new neighbourhood to the east of Amsterdam, Martien Mellema – like many of those around her – was sceptical. “We were all against it,” she remembers. “And at that time, nobody wanted to live there.”

The area in question was IJburg: a man-made island and something of a utopian vision, expressed in the shape of wide streets, leafy parks and modern housing developments, flanked on all sides by vast expanses of open water. Soon enough, Martien’s initial doubts subsided: she saw the merits of this blank canvas, which remains in development to this day. Here, residents had a chance to design and build sustainable homes as well as form strong communities, echoing a lost sense of freedom associated with the Amsterdam of old.

“Every time I cycle across the bridge to the centre of the city, it always gives me a sense of freedom. I feel the air, and I can really see the sky here in a way you can’t when you live in the city.”

“When we first moved here, it was all sand – just one open field. We used to throw parties in the street with big fires, and the kids would run around making huts from old palettes.” Today, IJburg offers a glimpse into the future of city life, and Martien and her husband remain proud residents – their new home is another self-build, this time powered by roof-mounted solar panels. “A few years ago, we realised we had to think of the future – about where we would live once the kids moved out,” she recalls. “We cycled around Amsterdam looking at different places, but in the end we realised we just really liked IJburg, because of the connection with the city and the water.”

“It’s that combination of nature and city life. But it’s also the population of IJburg, which is a really nice mixture of people. We also love the water – in summer we can swim in front of the house, and in the winter we skate…if it’s cold enough! Every time I cycle across the bridge to the centre of the city, it always gives me a sense of freedom. I feel the air, and I can really see the sky here in a way you can’t when you live in the city.”

Beyond the perks of the local lifestyle, Martien’s appreciation for her community has come into further focus of late: an ongoing campaign against a proposed wind farm – threatening both local ecosystems and the neighbourhood’s sweeping views – has enhanced the feeling of solidarity among IJburg’s residents. 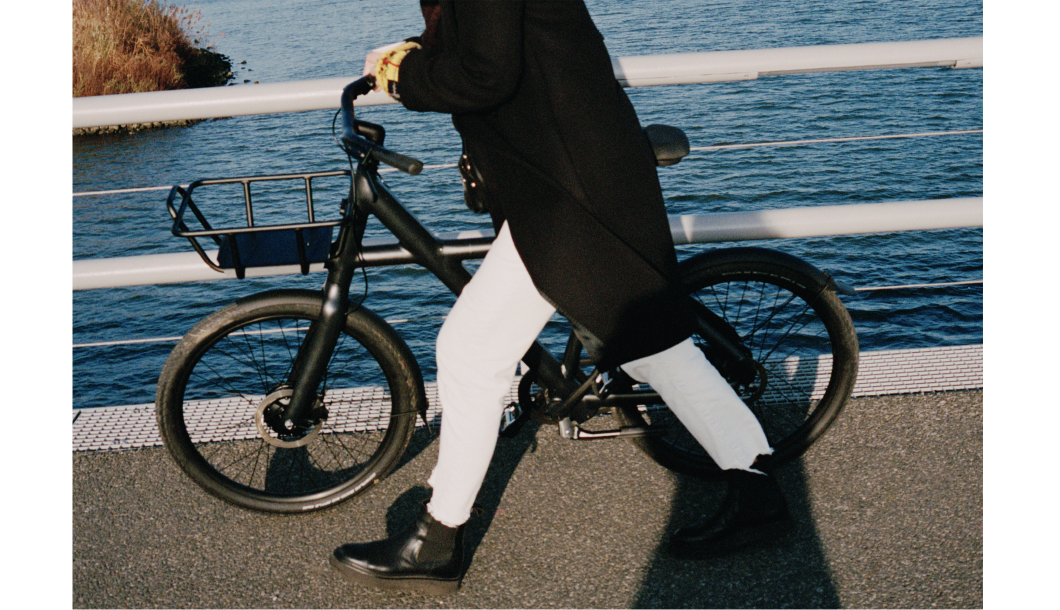 The notion of community is also of importance to Martien’s professional life. She’s been a mainstay of Amsterdam’s fashion family for a number of decades. Having worked as a fashion director, a creative director, a style director and an editor for the likes of Elle, Glamour and Vogue, her resume is sprawling. But beneath the long list of achievements, Martien’s motivations are rather more straightforward: “Whether someone wears a particular label has never really interested me. I’m interested in why people are attracted to certain clothes. That’s because I like people – and what I love most about my job is connecting people and finding new talent.”

Reflecting on her long career, Martien identifies the launch of the Dutch arm of Vogue Man as a particularly pivotal moment. “I always loved telling stories through styling, and the first time I could really show what I liked was when I made Vogue Man, because I’d always fought hard for a men’s magazine. People never thought that it would sell – there were a lot of fights – but I think you have to try to embrace new challenges and be open-minded. For me, at least, being open-minded has always helped me in my profession.”

For Martien, life in the fashion world, and in magazine-making, is as much about reading the pulse of our times as it is about peering into the future – and there’s a lot to be excited about. “I think there’s a shift going on in fashion to make things open to more people, and people in the industry are maybe more collaborative nowadays”. This collaborative spirit, she explains, has ushered in more frequent exchanges between fashion professionals and those from other creative fields, from ceramics to painting. “The community now is more concerned with the future, and that curiosity is going to be really important for the industry.”

"All in all, I love that feeling of being outside, alone with my thoughts. That’s my freedom, in a way."

Whilst Martien urges the younger generation to “take risks, stay curious and go for it”, some of her advice is altogether more practical. “When we had interns working for the magazine, I would always tell them to go out and get a bicycle – that they would need a bike whilst they were in Amsterdam. First of all, it’s healthy. But you also get to see so much when you’re outside, cycling through the city.”

Although journeying by bike is an unconscious daily ritual for most people in the Netherlands, Martien’s affection for cycling is even more pronounced than her counterparts. Growing up in Diemen, a town in Amsterdam’s outskirts, the bicycle offered Martien constant access to the endless thrills of city life. “I’ve had every different kind of bike over the years,” she recalls. “And everyone who knows me will tell you I was always the one cycling, whatever the weather – and somehow whilst carrying all the styling for my next shoot!”

“When I’ve got somewhere to go, the route I take really depends on how I feel that day. I never liked waiting around for the tram or the train, so biking gives you a kind of freedom to be your own boss – to come and go when you want to. All in all, I love that feeling of being outside, alone with my thoughts. That’s my freedom, in a way.”