VanMoof’s recent CGI extravaganza was only the start of the trip. In the hand-drawn sister film, illustrator Jim Stoten celebrates the power of bikes, and their potential to transform cities worldwide. We caught up with Jim in locked-down Hastings to chat about channeling creativity, leftfield inspirations, and how to stay positive in a world turned upside-down.

Hi Jim, how are things going over in the UK?
It’s mad really, everything feels like it’s falling apart at the seams. My girlfriend is from Venice – she’s just bought a flat there and I want to move there as soon as possible. There’s a very strange atmosphere in the UK right now. People I speak to here are a mix of confused, bored, resolute, and angry at the same time.

Where would you position yourself on that scale?
[Laughing] Confused, bored, and angry…not so resolute.

Are you the sort of person who can channel those feelings into your work? Or is your work an escape from all of that?
It’s definitely an escape. I’m making it sound like I pay a lot of attention to what’s going on in the world, and I don’t really. It’s better for my mental health not to know what’s going on all the time everywhere, and to focus on the things that keep me motivated. One of the best ways to stay positive is to embrace a certain amount of ignorance. You can invest a lot of time and energy trying to understand everything that’s going on everywhere – because all of that information is available – but if you do that you’ll lose your mind. And that just spreads more negativity. To me, the best way to have a chance at affecting anything other than yourself is to be positive. And the best way to be positive is to ignore everything. Admittedly, it’s not a perfect philosophy.

So is the frog animation an aspect of that positivity?
I think so! The project is going pretty well right now – we’re currently mapping out the skeleton of the animation with Bewilder. Whenever I send over finalised artwork, they put those elements directly into the animation and make it start moving. It’s all looking really good. Right now we’re working on smaller animation loops which provide a second layer of purely cell animation. Those layers will merge with the more technical digital animation which the other team is doing. That means we can keep a handmade look and feel while still working quite quickly in parallel.

Are you directing the animation studio? Who’s in charge?
I’m not directing, or at least I don’t think I am. There’s been a lot of freedom on my part, which I’ve really loved. Jobs like these usually involve a lot of voices from the brand side, with their own ideas about what the thing should look like. But Pascal’s been brilliant, with really good ideas. The whole thing started with a script he wrote, and he gave me complete freedom to interpret it visually. His notes and feedback have mainly been questions – like “What’s that going to look like when it’s done?” It’s a really enjoyable conversational process, and feels like a collaboration on all fronts. I do have a lot of ideas which I take to Bewilder, but it’s always a discussion to see how we can ‘do it best’.

How did Pascal pitch the project? What did that script look like?
It wasn’t a lengthy document at all. We first looked at the CGI film made by The Mill, with a frog on a bike. Originally, the idea was that this project would be a part of the CGI film – that that journey would transform into this 2D cell animation world. So Pascal’s original script was just lines like “frog rides through portal”, “frog sees cars spewing out smoke”, “frog gets drenched by puddle”. It was almost like a poem, the way he wrote it. But it was really good, and it was easy to visualise the whole thing. Then I sketched out and storyboarded the whole thing, made a few changes. And from then, my job has basically been to develop those sketches and bring it all to life.

VanMoof’s brand style is very minimalist, but yours is the opposite – it’s kind of maximalist. Was that a concern?
It’s definitely something I thought about, and I admire the risk-taking attitude. It’s great to see a company where people are excited about risks, rather than being scared of everything that could go wrong. I’m used to suggesting ideas and hearing, “Well we could do that, but it’s probably not a good idea...” But at VanMoof I got the opposite, it’s a much more open environment to work in. I hope work like this is going to broaden the appeal of the brand. I do think it will add something to VanMoof, rather than looking like something separate from it. If you are a brand, why would you stick to one visual language? You’re still the same brand, even if things look different. It just makes things more exciting.

Was The Mill’s CGI film a point of reference? Or more like background knowledge as you work?
I didn’t reference it directly or base the hand-drawn stuff on images from that film. I had a long list of animation references, and I spent a lot of time marking specific moments in things which I liked. The Beatles’ Yellow Submarine is obviously a big one, although you wouldn’t necessarily be able to see that in the final film. It’s such an iconic piece of work that as soon as you do anything which is vaguely similar, it all gets lumped into the same category. I do love that film, but it’s easy for references to become quite obvious. There’s something about the characters, the movement, the colour, the composition, that you see repeated again and again. Those reference points are so ingrained in our culture – I wanted to avoid that kind of visual shorthand. For this project I’ve found it helpful to look at things that are quite niche, like lo-fi Japanese animation. It’s easier for me to be inspired that way, and not worry about lifting things directly.

I guess the transformation aspect of Yellow Submarine is another parallel – we see a photo-real frog morphing into this very stylised world. Was that deliberate?
Yeah I think so, I’ve always liked the idea of 2D characters breaking out into the real world. I wanted to do a series of interviews on my Instagram where I’d wear this giant papier-mâché frog’s head, kind of like Frank Sidebottom, but I think this was a bit too weird. Too many people were asking “Why would we do that?” So I guess that part of the project is on hold for now.

I saw an interview where you said it’s pointless to look for meaning in your own work – how does that sit with this film?
I think it’s more that there’s a problem in seeing your own work as important – as if it has a deeper ‘meaning’. That can actually get in the way of making work that means something. I recently spoke to the daughter of a famous artist I really admire. I’d been reading some pretty academic work about him, explaining all the references and coded messages in his work. But when I asked his daughter if he was always trying to say these things, she said “No, he was just making stuff”. All that meaning and interpretation gets put on afterwards. That’s why I think it’s important not to get caught up trying to say too much because people can add that layer themselves. If the ‘answer’ is already there, then you as a viewer get taken out of the equation, you don’t have room to make up your own mind.

But then this frog film does have a meaning, right?
Yeah, when you talk about meaning in art and bring it back to a cartoon frog, it starts to sound a bit ridiculous. You have to remember that this is a commercial product, and the point of it is to have a very specific meaning. But by adopting that mindset I can approach a project like this in a way that allows me to have fun and still communicate a very specific message – in a way which doesn’t feel patronising. People don’t like being told what to do, but there’s always a middle ground when you focus on feeling and emotion. I don’t want this to just be another cynical ad film, and we’ve definitely avoided that. At the same time, I don’t want to be lofty and pretentious – I just want to stay interested. And the best way to do that is to make sure it stays fun, and fun to make. That’s why it’s been so enjoyable so far.

I think that categorises all of your work, right? It’s all very ‘fun’.
Yeah, my work can be very silly. Which I don’t think is a bad thing at all. I find it really exciting to see something which catches your eye and doesn’t seem to mean anything. Then you can’t help but start putting meaning onto it.

Your work has a very ‘positive’ feel, how do you stop that from becoming saccharine?
I don’t know if it does. I hope I avoid that, but you can’t ever be sure. I don’t want anything I make to feel twee or cutesy, so I’m always checking myself. And if I know how a drawing is going to turn out from the start, it’s usually no good. I need to figure it out as I go, every time. That’s why some commercial projects can become tedious because there’s no room to do that. It’s the process of making all those decisions as you go which keep it from being saccharine or predictable. If it’s fun to make, it’s usually fun to look at. And if it’s laboured and you’re just going through the motions, I think you can tell.

When you have a project like this where everything isn’t laid out, then you have space to make real creative decisions along the way. That’s quite rare, in my experience. Companies usually don’t like trusting creatives, they want to know what they’re getting from the start. And I really appreciate when that doesn’t happen, in the projects like this one. It makes you feel really good, and I hope it makes you feel really good when you watch it. That’s all the meaning you need sometimes.

Visit the insights page for more on how the world is changing, and find out how VanMoof riders are making an impact around the globe.

Find your nearest VanMoof location, and take the VanMoof S3 & X3 for a test ride today.Shop the bike.

A year into the bike boom: How mindsets and behaviors are shifting in favor of a two-wheeled world.

Taco Carlier: Our cities are for people, not cars. Here’s why it’s time to free Berlin from gridlock.

Our riders dreamt up a bike-filled future city – and it looks wild. 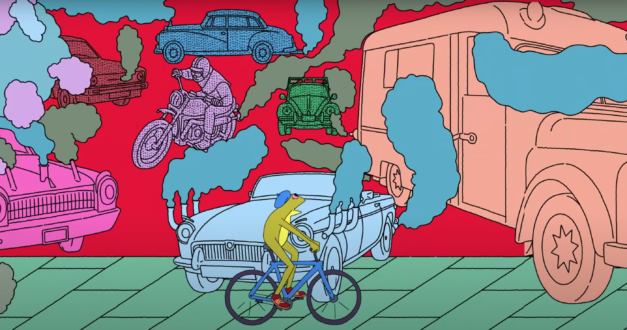 Can you imagine a city filled with bikes?