What the frog? Our latest campaign film is designed to make a splash, with an amicable amphibian riding the VanMoof S3 & X3 into a psychedelic dreamworld. Following the sensational ‘Reflections’, Creative Director Pascal Duval explains why it’s time to jump into the future.

First things first, what’s up with the frog?

With this film, we challenged ourselves to look beyond the traditional bike and tech brand imagery. We often see these products presented in a very cold, very masculine way. That never made sense to me. Bikes can be ridden by anyone, so why target such a narrow demographic? In parallel, we wanted to celebrate the impact bikes can have – the impact they are having – on the environment. The frog came to represent that. It’s the playful, positive relationship with nature that the act of riding a bike encourages. It’s definitely an unusual image, but it’s intriguing. It makes you ask questions, and start thinking about new kinds of answers.

What about the new message – ‘ride the future together’?

That concept evolved from our last campaign, ‘Time to Ride the Future’. That was a much more straightforward call-to-action, which gave a sense of individual urgency. It captured a feeling a lot of us had at the start of the pandemic – the feeling we had to rethink and update the ‘old ways’ of doing things. The pandemic hasn’t gone away, but we’re starting to see things with a new perspective. ‘Ride the Future Together’ is a much broader statement, with a wider audience. This new film isn’t about tearing down the past, it’s about riding into the future with a curious, positive mindset. If we all do that as a community, we can really change the world.

And that kind of change is already happening. Just look at the Champs-Élysées in Paris. This icon of city congestion is being transformed into a beautiful garden which everyone can enjoy. If we can embrace that mindset, if we can all take responsibility together, then we have a real chance to improve our cities forever. It doesn’t have to be super-serious. I think it’s more effective if we embrace that sense of play and community. 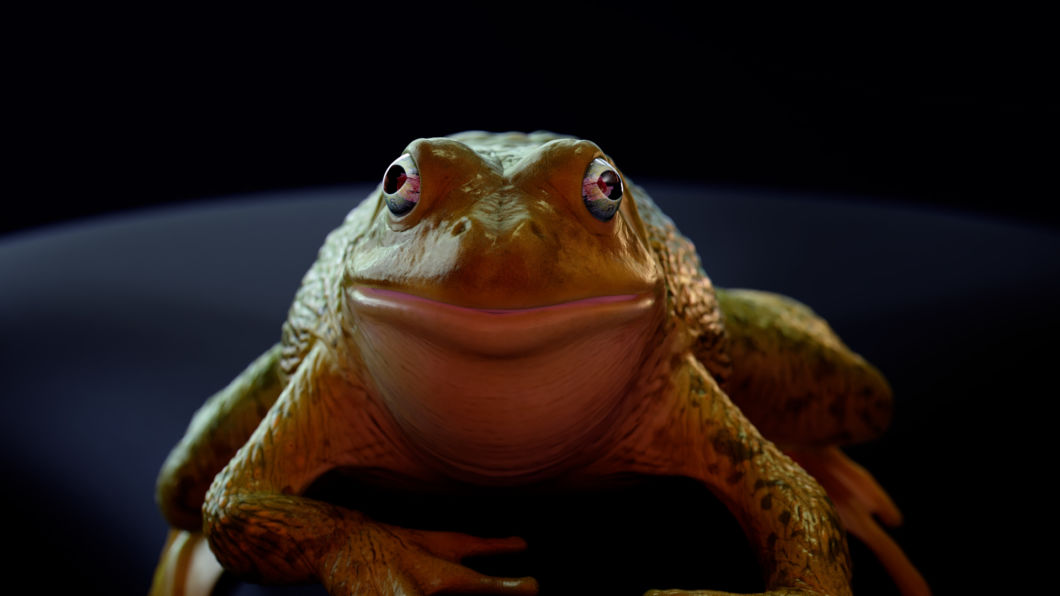 How did that idea develop?

The concept really grew out of the bike itself, and the way it’s built. My first sketches were based around heroing the bike’s smallest components, showing how even a tiny screw could be a positive force for progress. There are still elements of that idea in the final film, but we realised the idea was much more powerful if we push the messaging beyond the bike itself – beyond VanMoof itself.

That’s where we started to introduce more psychedelic, more trippy elements. The bike becomes this kaleidoscopic lens with blooming flowers exploding ahead of you. It’s all very abstract, but it’s still really simple. And it’s fun! That’s something we should never underestimate. Bikes don’t just have a positive impact on the environment, they make you feel good, both mentally and physically. To make a real difference, we need to celebrate all of these benefits together. 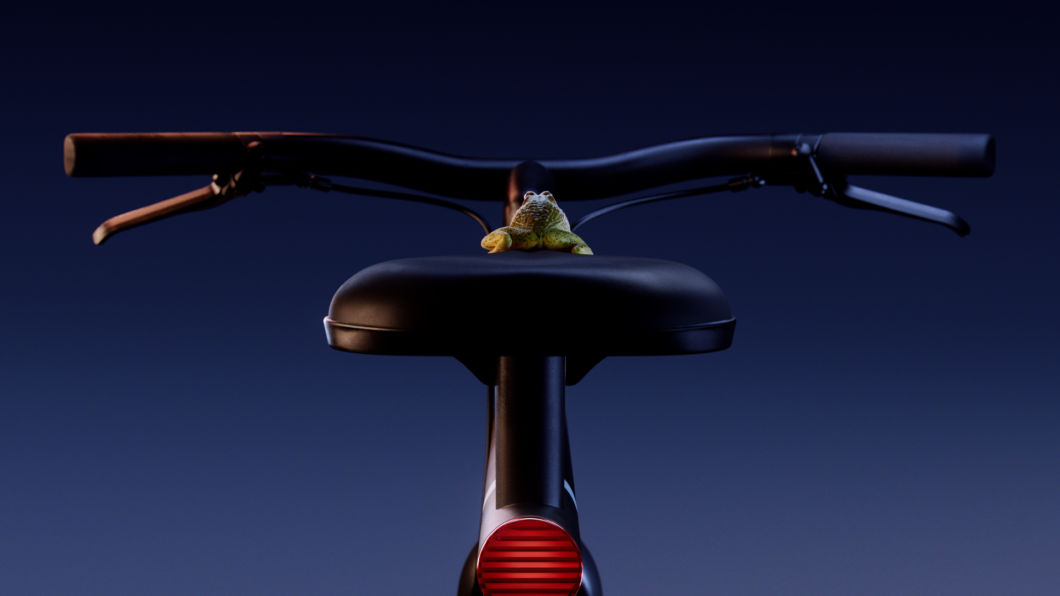 What did partners The Mill bring to the project?

The Mill are one of the most respected CGI production companies in the world, specializing in everything from music videos to full feature films. Their credits are pretty amazing, and we knew they could bring literally anything we imagined to life. That level of expertise is super-empowering but it’s also quite intimidating. There’s a danger that something you picture inside your head doesn’t look so good when it’s brought to photo-real life – especially when it’s a frog sitting on an electric bike.

But there was no need to worry. Even in such a relatively short timeframe, they completely blew us away. At every stage, you could see the renders becoming more and more lifelike, until they reach the final stage of hyper-reality. The CG models of the bike and frog were crazy; you could blow those up to the size of a billboard and you’d still discover new details, textures you could almost reach out and touch. That’s extra important with semi-surreal images like these – the feeling that it’s a tangible object, existing in a physical space. It makes everything seem so much closer. 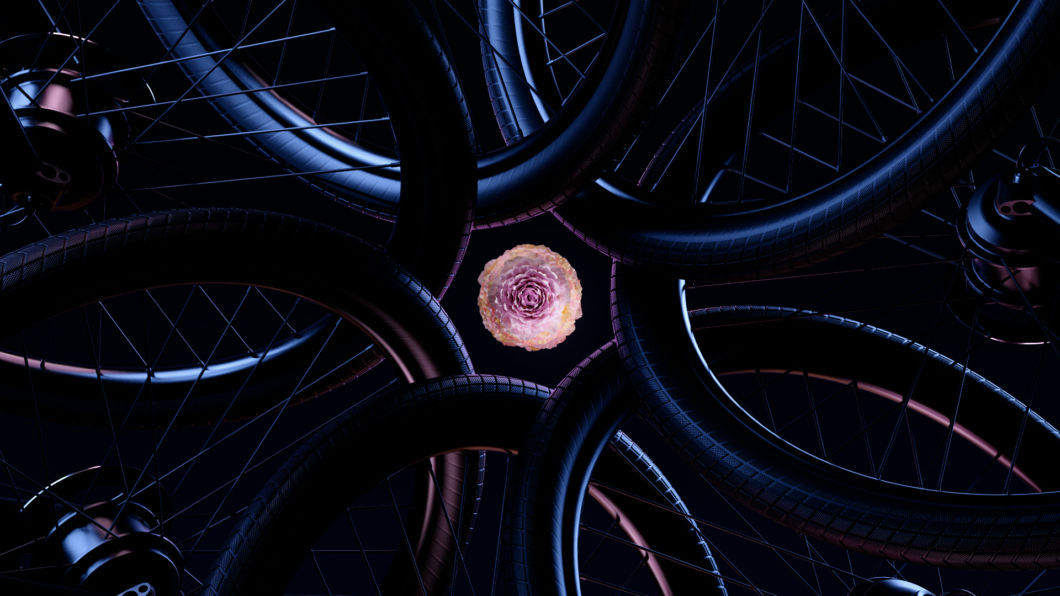 How does the soundtrack fit in?

That’s where there’s a real through-line from ‘Reflections’, where the Diana Ross song sparked inspired the whole concept. This time, it was The Turtles’ Happy Together. It’s such a huge song I knew we could never use it, but it has the kind of dreamy positivity I wanted to bring to this film. Without getting too sentimental, biking does make us happy together. It improves the world for everyone.

The track we chose came out a few years ago but sounds like it’s from the same 60s era. It has that same warm, timeless quality which makes the message even stronger. When the CG visuals look this real, you could watch it in 5-10 years and it would still have the same feeling, the same relevance. That’s the whole point. We know change isn’t going to happen overnight – but if we can carry this energy into the future we’ll see the benefits all around us.

Move fast to secure your Outlet e-bike for even less: Our limited Outlet Warehouse Sale drops in Utrecht, starting this Saturday

In conversation with Tobias Fouracre: the Puppet Mastermind behind our latest film

Learning? It’s just like riding a bike. We take a look at how we keep our brains constantly evolving at VanMoof.

The cost of reinventing the wheel, by Taco Carlier.