Melting a full size car is all in a day’s work for Lauren Egen. She explains how Builders Club stretched the boundaries of reality to create VanMoof’s latest film.

We were approached by VanMoof for the S3 & X3 launch campaign, where we had to find a way to bring the new e-bikes to life. With everything that’s happened since it feels like a lifetime ago, but it was only a couple of months back. Back then we were using hyper-real visualizations to showcase the bikes’ capabilities while developing the “time to ride the future” messaging – which carries over into the TVC.

We did kick off an earlier version of the film which played with more elements that you’d see in a traditional car advert. But as the coronavirus situation developed, we had to take a step back and rethink the film’s messaging to make sure it was as sensitive and relevant as possible. Our founders and creative directors Jonas and Julien reworked the treatments with Pascal from VanMoof, and Pascal zoned in on the theme of “reflections”, which guided the project through to the final execution.

So how did the concept develop?

Even though elements changed throughout the process, the focus was always on this central ‘evolution’ from car to bike. We were originally exploring more destructive elements, where the car was torn apart in different ways. But we were conscious of not making it too aggressive or moralistic. We didn’t want to directly criticize people who drive cars, because most of us do. When we settled on the reflections theme, the tone became more contemplative. It became more about looking back and inwards at ourselves to decide on the kind of future we want.

Is the creative process different when you’re working with CGI?

A lot of Builders Club’s work exists in the realm between real and unreal, so we’re always playing with that boundary. Whatever the project, we’re always pushing ourselves to create something people have never seen, and pull at things that feel surreal and make you question what you’re seeing. It gives you a much deeper connection, rather than only engaging on the surface level.

Then it’s the same as any other creative project. After the brief, the whole team will align on the treatment, pooling our knowledge to see how we can best approach the concept. We’ll then build a very rough wireframe version to work out the timings and shots. From there it’s a case of pushing it to the ‘real’ CG stage and refining everything from there. It was a completely in-house production, so all the art direction and rendering was done by the team based here in London.

How do you keep things grounded when pushing the boundaries of reality?

To me, it’s about keeping things in the realms of readability, or keeping ‘touchstone’ aspects based on real-life physicality. Obviously there’s nothing realistic about melting a car in a few seconds, but by making sure the textures move in a pseudo-realistic way we can guide the viewer’s response. It’s also important to consider the context, so it feels like this is happening in a believable environment. As long as the lighting and materiality are on point, you can quickly accept something as being real, and not get carried away by the fantastical nature of the effects. And of course, we’re combining this with ‘reflections’ of real-world footage like gridlocked traffic, and crowded subway trains. Those visual cues rein in the more out-there visuals so that, even when you see something impossible, you understand the real-world connection.

Did you ever plan to use a voiceover?

We were definitely playing with the idea in our first creative treatments. But we knew that if we could find a song with great lyrics that spoke for itself, we wouldn’t need to over-explain things with a voiceover. And the track we landed on was so perfect that we never looked back. It balances melancholy with positivity, the opportunity for a ‘new day’, which is exactly the kind of tone we wanted to strike with this film. It’s encouraging and inspiring without finger-pointing or being moralistic.

How many people are involved in a project like this?

There were three artists, myself as creative producer, and then Julien as creative director. It sounds like a very small team, especially when you see the end result. But when you have such a precise story it can be more efficient to work with a few key people instead of delegating everything across a bigger network. And with such a tight turnaround and everyone having to work remotely, having a smaller team irons out a lot of communication issues and potential wasted time. It was actually the perfect setup for this, everyone could completely focus on their area of expertise.

Was this your first project under lockdown?

It was, which meant there was the additional challenge of navigating this new way of working. Luckily, the nature of our work means everything can be done remotely, except the render farm is stuck in the office – it felt like that was another colleague we had to occasionally check in on. Still, the team is very agile and we’re used to working with freelancers from all over the world, so it wasn’t too big a step for everyone to switch to working from home. There definitely wasn’t anything that limited what we could do or affected the film in any negative way.

How did COVID-19 affect the project? Is this a ‘corona’ commercial?

Pascal was always very sure of the story he wanted to tell, even before the virus became as big as it is now. So it definitely isn’t a direct reaction to COVID-19, but the virus does give much more weight and significance to the story we’re telling. The idea of greener cities and cleaner air is something we’re already seeing happen, and more people are looking for smarter ways of getting around. We’ve had a lot of time to think about the way we do things across society, and it would be a shame if we made the same mistakes all over again. VanMoof’s identity is so future-facing that it really leans into the situation the virus has created. It’s always been about building a better world and more sustainable future, and the present moment highlights the need for that more than ever.

Inside the ride: Experience Design 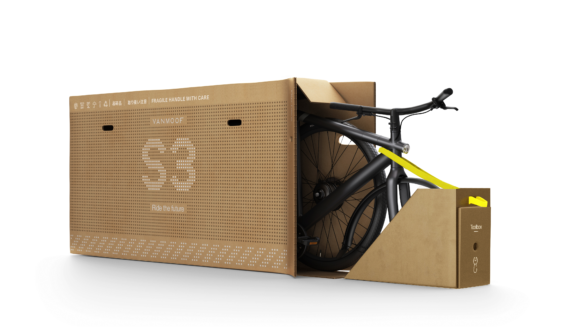 Empty factories; waiting riders. How we turned the tables on the e-bike industry to deliver faster than ever.

Building the Future: Diving into the deep end

Building the Future: Going the distance for our riders