It’s no secret that I believe our urban future is car-free. The idea that our cities are powered by the humble bicycle is one I grew up with – and one that’s far too good to shake.

The sound of bike bells accompanying our daily to and fro; joining the morning parade of two-wheeled commuters; transporting the kids, plants, groceries across town – these moments bookmark our lives in the Netherlands from as early as we can remember. But I soon discovered that Dutch biking habits are far from universal. The car still reigned as king in cities worldwide; my dream for a future brimming with bikes was smothered by smog.

I’ve since made it my mission to pave the way for a future where our cities are built for people, not cars. At VanMoof, our goal is simple – get the next billion on bikes to create safer, greener, cleaner cities for all. And to get there, we have to push for change at every opportunity. That’s why I’m supporting the Berlin Autofrei initiative petitioning for 20,000 signatures from Berliners to transform streets within the S-Bahn-Ring into car-reduced spaces.

On visits to Berlin, I’ve been shocked by the lack of infrastructure for bikes. How could the German capital, often seen as a similarly innovative city to Amsterdam, remain so reliant on cars? The Berlin Autofrei initiative is an opportunity to change all that. Berlin Autofrei takes a crucial step towards a greener, cleaner Berlin. It breathes life into our mission to free cities from gridlock and puts plans for a better urban life into motion.

The solution? Leave cars in the dust.
Over the course of the pandemic, the fumes in our cities started to lift. People have abandoned their cars, and are choosing bicycles and e-bikes more than ever before. The air is cleaner, and our vision clearer – the movement has already begun. So, here’s the question. How do we keep up the progress we’ve already made as our societies are slowly able to reopen?

Well, the answer’s clear. The best thing we can do is reduce and ultimately eliminate the use of private cars in our inner-city spaces. Autofrei Berlin makes a clear case for car reduction in Berlin, arguing it will provide fair use of space for all modes of transport, a more sustainable and safe city for both our planet and ourselves, and build a better quality of life for inhabitants in citizen-centered cities. But I’ll help paint a picture.

Imagine the cars and their parking spaces are no longer packed into streets. In their place are bike lanes, widened pavements for pedestrians, and safer crossings, making neighborhoods accessible for every member of society. Lush greenery and plant beds line the pavements, and street vendors and café terraces spill out onto the streets. Walkers, runners, and cyclists make use of the reclaimed space – people are valued over cars in this town. The air feels a little cleaner, and instead of the dull roar of traffic, the air is filled with sounds of people, bike bells, and birdsong. Okay, and the occasional siren – we’re still in the middle of Berlin. 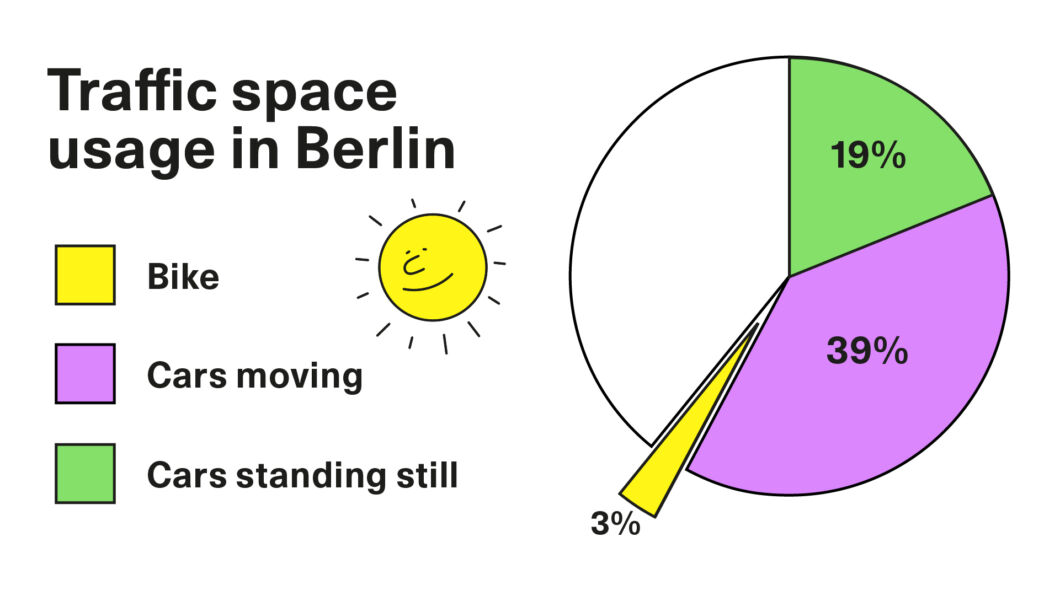 Urban space is precious. Why waste it on cars?
Cars don’t just pollute the air we breathe into our lungs – they also take up a colossal amount of our finite space in cities all over the world. In Los Angeles, for instance, land for parking exceeds the entire land area of Manhattan – enough space to house almost a million more people.

In London, SUVs – the most polluting and space gobbling of all cars – are abundant in areas where road space is most scarce. In Berlin, 58% of traffic space is used by cars, and only 3% by bikes – that’s 19 times more space given to cars over bikes. And a car in Berlin doesn’t even move for on average 23 hours per day but blocks 10m2 of space. It’s time to rethink what, or who our cities are built for.

Just imagine if all the cars you saw in your city weren’t there. What would take their place? Bike parks, playgrounds, flower, and plant beds, or just…more space. Several cities have already taken steps in the right direction. Paris’ busiest junction, the Champs-Élysées, is set to be transformed into an “extraordinary garden”; Barcelona has pledged to turn one in three streets in its Eixample district into green, car-free public spaces.

During the pandemic, Berlin itself gave a new home to 27 kilometers of pop-up cycle lanes. So why stop there? The Autofrei petition is a push forward for the German capital. I’m in their corner, and not afraid to fight. 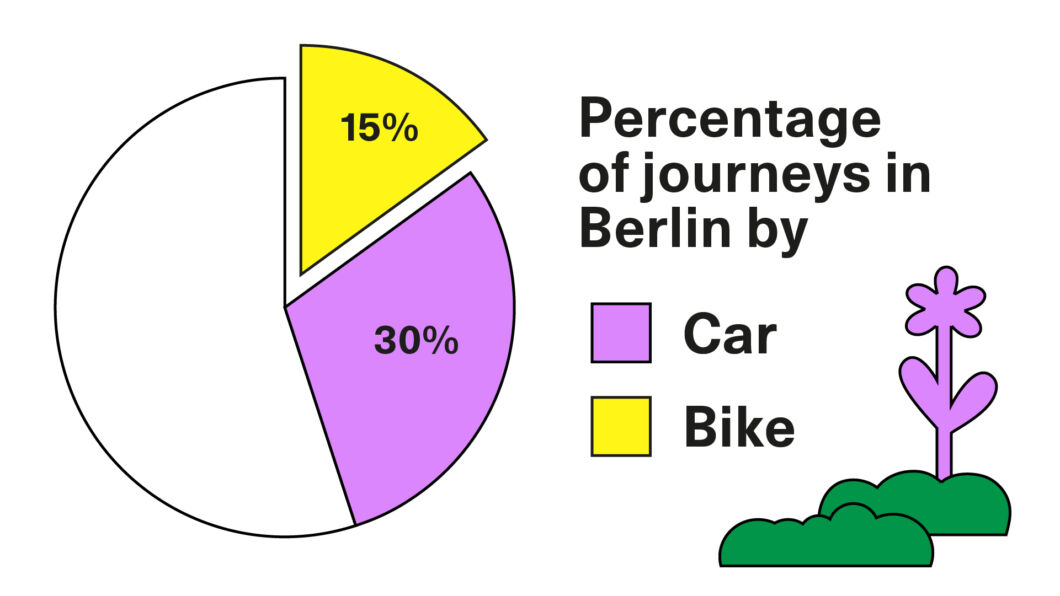 A blueprint for change
The goal of the Autofrei Berlin petition might seem radical at first glance. But it is in fact a realistic and even inevitable opportunity to create change not only in Berlin but in other cities too. Historical change comes from people, and it always has to start with someone. One signature can become thousands, and thousands demand to be listened to.

VanMoof’s hometown of Amsterdam is perhaps an important place to campaign for such change. Today, 40% of Amsterdammers’ commutes are made by bike. But the city’s status as the cycling capital of the world wasn’t always set in stone. Dystopian drawings from 1954 reveal plans to fill in Amsterdam’s canals and create a city dependent on and structured around cars. Luckily, the people stepped in – the bike-friendly city we see today was born from a movement following the 1970s oil crisis after the Cyclists’ Union took to the streets.

Pushing for change in the design of our cities has already happened, and it will happen again. What happens in Berlin, like Amsterdam in the 1970s, has the potential to become a blueprint for all of our future cities. When it comes to change, I like to focus not on what we lose, but all that we’re set to gain. And from where I’m standing, that looks like a great deal.

Illustrations by the Berlin-based artist Martina Paukova. Explore more of her work here.

Taco is co-founder of VanMoof, and the original Bike Hunter. Based at our Amsterdam HQ, he’s constantly dreaming up new ways to share Amsterdam’s biking culture with the rest of the world.

Winter biking made easy: Three tips for winter-proofing your ride.

JobRad x VanMoof: A match made in bike heaven.

A test ride like no other: Experiencing Eindhoven’s GLOW festival by bike