The sun is setting over Vondelpark and the smell of barbeques and warm grass follows me as I cycle home from a friend’s house. It’s mid-summer in Amsterdam and once again I’m amazed how late the sun is setting — around 10.30pm.

I hear music playing from speakers brought to picnics, and somewhere someone is singing and playing a guitar. However, I’m not looking for the live music, I’m much more interested in the people I see cycling past or alongside me.

I’m following a couple who are holding hands. He is white and she is black. Her dress is bright pink and his trousers are flared. They both cycle in bare feet. After they turn off I find myself behind a man who sits very upright on his shiny, new-looking Omafiets. He is wearing a suit and his briefcase is attached to the back of his bike with elastic straps. As I move past him, I nearly collide with a giggling group of teenage blonde girls cycling in the opposite direction. Behind them is another group of women, just three of them, who are also laughing together. They are wearing hijabs and two of them have seats for children on their bikes.

Behind me I hear a bell ding and so I move a little further to the right. The cyclist responsible for dinging moves past me — because that’s all a bell is used for here, a gentle nudge to move aside — and I see it is a woman with gray hair and a face that looks much older than her body which is pumping the pedals at some speed. Up ahead I see a family of tourists wobbling along on two tandems and I give them a wide berth as I pass them and cycle on…

The cycle of life in Amsterdam

I see more people on my journey but this was a very representative cross-section of bike riders in the city as Amsterdam’s cyclists are people from all walks of life, all colours, all religions, all backgrounds, all ages, and all professions.

At a time when divisiveness feels worryingly ever-present it's comforting to see so many people connected by something so life-enhancing: cycling.

The stats confirm that what I see is true; 20% of all 80-84 year olds cycle regularly in the Netherlands, more Dutch women than men cycle, and 58% of Amsterdammers over the age of 12 cycle daily. When you consider that Amsterdam is a very international city — a 2012 population survey found 49% consider themselves Dutch, while 51% of residents were of foreign ancestry — it’s impossible to say that only one kind of person cycles in Amsterdam, and long may that last.

There are obvious reasons why cycling is a social leveller in Amsterdam. Compared to other modes of transport it’s very affordable, it’s a social activity (people can easily cycle together), and it’s a quicker, more efficient and more pleasant way to travel no matter what your means are. Bikes can take more direct routes than cars, have priority at roundabouts, and cyclists can park much closer to places… for free.

Community, sharing, and cycling have become connected in other ways in recent years, with bikes being at the very roots of the current shared economy phenomenon. It’s believed the first bike-sharing scheme of its kind was in Amsterdam in the 1960s when Dutch political group Provo left 50 unlocked white bikes around the city, partly in protest against the then government’s resistance to improve safety conditions for cyclists (the bikes were confiscated almost immediately). Nowadays, bike-share schemes can be found in nearly all major cities and the “collaborative consumption” concept has gone on to change many industries, presenting both challenges and opportunities in the future of urban planning.

Cycling is so ingrained in the Amsterdam way of life that most residents, of all backgrounds, are oblivious to the way it bridges social divides. Coming from London, where the way you travel around the city is very much defined by your income and lifestyle, it is life-affirming that you can have this health- and mood-boosting activity that not only improves urban environments but also connects people.

Perhaps we need to leave the bike-busy streets of Amsterdam to really see its positive impact on community.

In Detroit, a city recently left half-destitute by the loss of industry, local man Jason Hall was desperate to leave, but after being made redundant he was stuck there. Bored and fed up, one Monday evening he and a friend went for a bike ride to see if they could connect again to their city while getting fit, and ten years later his company Bike City Detroit’s Monday Slow Rides are attended by thousands of local people who have reconnected with their city in a model that has since been duplicated in many other US cities.

In Manchester, UK, as cycling becomes more popular in the city, a non-profit organisation is training ex-offenders in bike maintenance and repair. In doing so they have changed the lives of many vulnerable people struggling with depression, anxiety, and isolation. As well as learning skills that helped people gain employment and independence, time is also spent riding bikes, thus improving both mental and physical health while a sense of community is created.

And back in the Netherlands, volunteers teach refugees to cycle, recognizing how empowering it is to be mobile on two wheels in a society where this is as normal as walking. I feel fortunate that more than these stories, my journey to and from work serves as a daily reminder that in cycling cities, bikes are a force of inclusivity, not exclusivity.

... it’s impossible to say that only one kind of person cycles in Amsterdam, and long may that last.

It’s not just cyclists who benefit socially from a cycling culture in Amsterdam. Not all Amsterdammers cycle, but still the infrastructure and outlook of the city enables a healthy and efficient coexistence of cyclists with pedestrians, public transport, and yes, even car drivers. Despite occasionally noticing near-misses and angry looks from all sides of the street, I don’t find that there is a “them and us” mentality in Amsterdam, and you’ll struggle to find many Amsterdam motorists who want to do away completely with the current model. Not that this is an option, as the Gemeente (local authority) is spending €54 million on enhancing and improving the current cycling infrastructure, a plan that is addressing problems caused by over-crowding as Amsterdam continues to grow and grow.

Even if Amsterdammers are unaware of the community building they do just by cycling down a bike path to work or collecting their kids from school in a cargo bike, they are nevertheless continuing this legacy of a shared city, where the city accommodates people from all walks — or cycles — of life; people who have more in common than they realise.

In addition to all races, ages and professions using bikes, it’s also not unusual to see Dutch or even international celebrities cycling around the city. A few years ago I saw Beyoncé posted a photo on Instagram where she was cycling down my street! I often wonder what I would have done had I found myself cycling next to her because when I’m on my bike there really is no barrier between me and the cyclist I am next to. No matter our differences, we are breathing the same air as we pedal our way down the same bike path in this unique city that makes this all possible. ♦

Frances M. Thompson is a British author, freelance writer and blogger who believes in the life-changing power of cycling cities, afternoon naps and disco dancing. 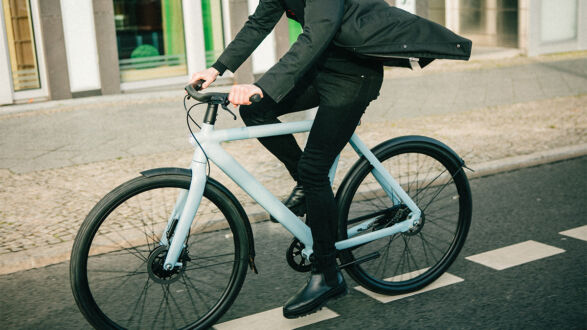