It’s your best friend, faithful steed, and constant companion – no wonder having your bike stolen sucks so much. Even in bike-friendly cities such as Amsterdam and Copenhagen, conventional wisdom states that you should ride the crappiest bike possible, because anything better is guaranteed to get nicked.

Sensible as that may be, it’s a miserable way to live your life – and VanMoof doesn’t like letting bike thieves set the rules. While the S2 & X2’s new Stealth Lock may be stealing headlines, our integrated tracking technology has been fighting the good fight since 2014.

Building location tracking into a bike might seem like a no-brainer, but three years ago it was almost unheard of. We knew location tracking accessories existed, but you needed to bring them with you every ride, keep them charged at all times, and hope that a canny thief didn’t remove them – otherwise it’d be game over.

Our first SmartBike made waves with its ‘unstealable’ rider promise, thanks to the GSM module hardwired into the anodized frame. Powered by the bike’s front-hub motor, the chip uses nearby cellphone towers to triangulate its approximate location, giving the Bike Hunters enough intel to swoop in and make a clean recovery. Better still, it was an integrated part of the bike – convenient for the rider, and extra inconvenient for would-be-thieves.

The Bike Hunters are packing a secret weapon: our super-strength Bluetooth scanner.

But of course, that’s only half the story. As of 2018, the Bike Hunters are packing a secret (or not-so-secret) weapon: our super-strength Bluetooth scanner. Developed by Engineer Paweł Kwieciński, the scanner can latch onto a VanMoof’s unique signal from the other side of town, guiding the Hunter to their two-wheeled target.

“It’s based on a Raspberry Pi but uses completely custom software, running a headless Linux distribution*” explains Paweł. “The antennae are hot-swappable, so you can switch it up to get the maximum range in any environment, and it also plays the Knight Rider theme song when activated – because why not?”

Thieves are starting to realize that not all bikes are worth stealing.

Despite the tech inside, the scanner is remarkably compact, perfect for covert operations. “We’re still in the prototype phase, but the aim is to have a final version in every VanMoof brand store, and distribute them to our Bike Hunters overseas. I’m already working on a waterproof housing, and will soon upgrade to the latest Raspberry Pi. The most important thing is that it’s completely plug-and-play; you just switch it on and follow the signal.”

Working in tandem, the GSM module and Bluetooth scanner make for a theft-busting one-two punch. And, as word spreads, thieves are starting to realize that not all bikes are worth stealing. “It’s funny: as the technology improves, we’re having less and less reason to use it,” says Hunt Coordinator Nathan Brest. “The data shows fewer VanMoofs are being stolen than ever before – but the hunt never stops!”

Ultimately, we want to stamp out bike theft by making bikes which are completely impractical to steal in the first place. Coupled with our Electrified S2 &X2’s integrated alarms and Stealth Lock, location tracking has become an essential part of VanMoof’s worry-free philosophy. We know that there’s no point owning the best city bike in the world if you’re constantly worried about it getting nicked – that’s why we’re fighting to make losing your bike a thing of the past.

As VanMoof grows around the world, we’re looking for more Bike Hunters to join our international network. Got what it takes? Sign up now.

Seeing is Believing An Interview with Yannick Boers

Let’s clear this up: Why that ‘We stole a VanMoof’ article is misleading 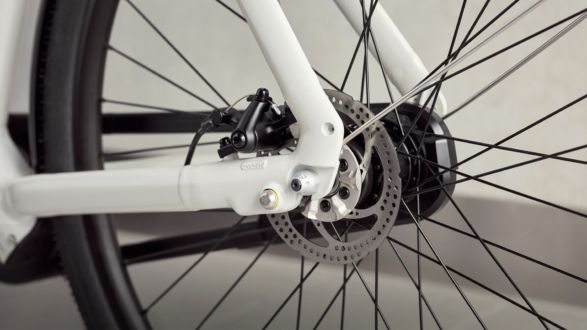 The Stealth Lock: Can I Kick It? Yes, You Can.